I've upgraded my project to Angular 6, and everything went fine except the conversion of .angular-cli.json file. From the guide I followed, it was said that this will convert it automatically.

However, it was not the case as I still have the old .angular-cli.json

Is there a way to do it automatically / manually?

Most likely there were errors in one of those commands. For me, I had to run npm install -g @angular-devkit/core first and then run the commands:

In the console output of npm install @angular/cli you should see:

Then you obviously should run ng update @angular/cli to finish off the process.

you can automatically update your existing angular-cli.json file to angular.json file by using the below command provided that you are on v6.x.x or greater of angular cli command line tool.

In the above command 1.7.4 is the previous cli version you were using. The --migrate-only flag makes sure that it will only perform a migration but does not update the installed version. Use --to instead of @angular/cli@6 because of https://github.com/angular/angular-update-guide/issues/64.

then you need to run 2 commands as follows

I was trying to update from 5.2 -> 6.1 and was running into an issue where after running npm install @angular/cli@6 followed by ng update @angular/cli@6, (as described by https://update.angular.io/#5.2:6.1) my package.json was being updated but none of the other files like .angular-cli.json or tsconfig.json were, even though I received no errors. I tried executing the update command multiple times but this had no effect.

I ended up running the following 3 commands which worked for me:

The only real change there is the second command. The document says to run ng update @angular/cli@6 but that wouldn't update any of the config files.

For upgrading version from 5.2 to 6.0 , I followed up the following steps.

After running this you have updated all your angular packages to the latest version.

3)Add this package as it is still missing

5) Create a new empty file with name angular.json and copy the content of angular.json from the new project into it.

6) Update the name of project accordingly in angular.json

9) You are now ready with the latest version of angular.

I followed the above steps to migrate from angular2 to angular7.

I had to actually commit every changes or stash them before I could run the command to update the cli as shown in this screenshot.

I did these commands:

And committing the changes between these two. 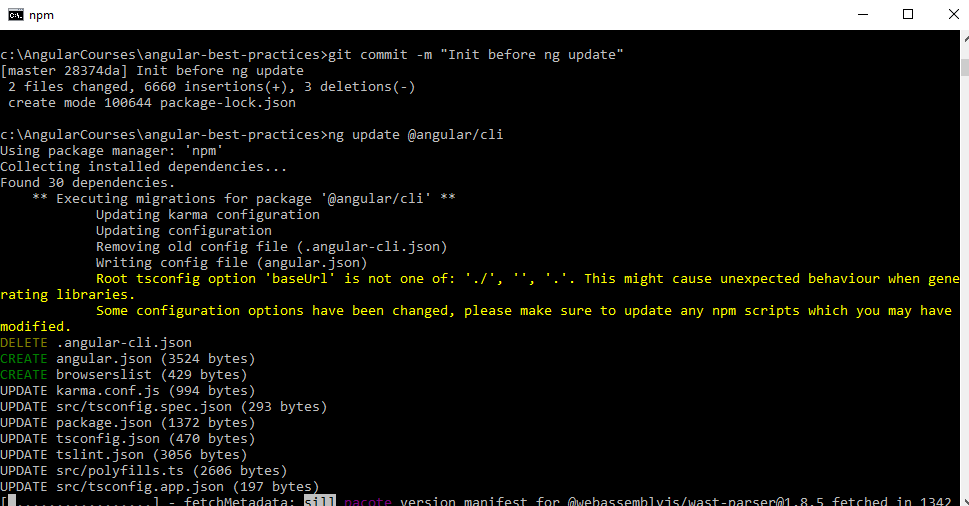